The Vampire Academy fandom has been having a crazy, busy week, and we are still seven days away from the release of the film. If you’ve been following all our coverage, then you’ve surely seen the crazy busy first part to this and the fact that seven clips from the film landed yesterday! More publicity and promotional stuff follow below! Also check out our Vampire Academy page and bookmark – we’ll be posting all the updates there.

1. On Tuesday,  Zoey Deutch was at the TEEN headquarters. Check out this awesome cute video of hers with quotes from the film.

“Looks like Aaron’s tried to replace you with a keychain version.” – Rose

“This is insane … insanely hot. What are we doing?” – Dimitri

2. On Wednesday, Sarah Hyland hopped onto a plane to New York and appeared on the Good Morning America show where she talked about the film and I must add, she met John Stamos, Uncle Jesse from Full House.

3. After GMA, Sarah hopped over to “Live with Kelly and Michael” where she spoke about her experience at the Grammy Awards, winning the SAG for Modern Family and Vampire Academy. They showed the clip of her character, Natalie, licking the wall and Sarah said it was a mixture of corn starch and syrup, but most importantly, it was edible and non-toxic. Check out the segment below –

4. Sarah has been doing a whole lot of press for the film, check out her red carpet interviews from last Sunday’s Grammy awards.

5. This really cute interview with Zoey and Lucy at the Buzzfeed office (on Monday) was published yesterday where both were quizzed about the other and the result was ADORBS. Check it out here! 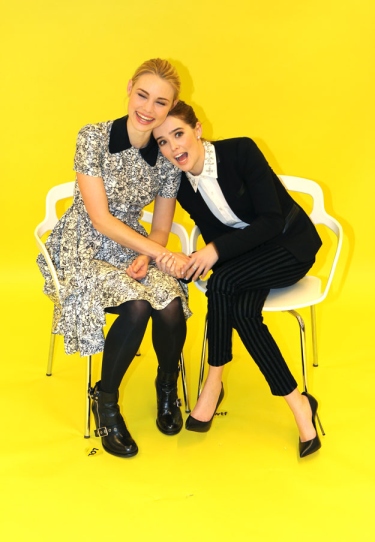 Some of our favourites –

Q. What is Zoey’s favourite colour?

Lucy’s guess: Lime green but that’s a lie, she doesn’t have one.
Zoey’s answer: Not pale green! Don’t know.

Q. What is Lucy’s pet peeve?

Q. What is Lucy’s Spirit animal?

5. The VA Movie Mall Party event took place in Houston yesterday and in attendance were Zoey, Lucy and Dominic. Fans got makeovers done and took home swag bags with makeup and goodies in addition to meeting the stars! Check out more photos on Fans of Vampire Academy and Just Jared Jr. 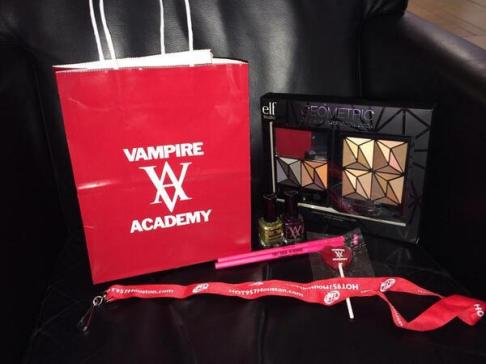 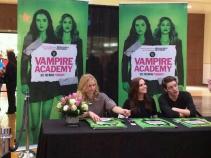 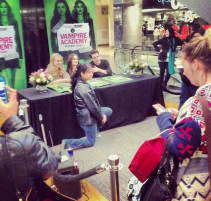 6. Before the Mall Party, Red Carpet Ending did an interview with Zoey, Lucy and Dominic. They spoke about their reactions on getting the part, how they got into the skin of their characters and all of them agreed that Danila was the funniest guy on set! Watch the interview below –

7. Later on, the three went to a signing at Barnes and Noble bookstore. You can read a fan’s experience right here on Tumblr. and check out the photos on Fans of Vampire Academy! Check out a fan video below –

8. Sami Gayle‘s interview with We Got This Covered popped up which you can check out here! She said she liked the whole spur off the moment thing with the release date being pushed up and it was exciting to start promotions on the film. She also mentioned that she is off to Los Angeles to start with the film publicity. She also spoke about her Skype auditions and her love for Mean Girls. Be sure to watch the video.

9. If you are looking to refresh your memory or just want to know what Vampire Academy is about, check out this article from Yahoo! Lifestyle New Zealand.

10. Cast promo portraits have also popped up with Zoey Deutch, Lucy Fry and Sami Gayle. The girls look so pretty. You can check out all the photographs on Fans of Vampire Academy. 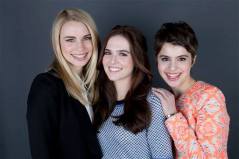 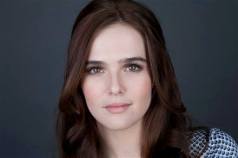 11. Finally, the Vampire Academy Soundtrack was made available for pre-order on the US iTunes stores and includes an additional song – Goldfrapp’s Felt Mountain. So be sure to get your digital copy as well!

There is more great stuff coming up guys, mall parties in San Francisco, LA and New Jersey and of course … the world premiere at Regal Cinemas in Los Angeles on February 4! So be sure to check back with us for our extensive coverage!