The official trailer for Frozen has arrived and it is EPIC-ally cute! 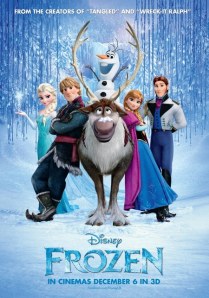 Frozen is an animated comedy from Walt Disney Animation Studios, the makers of Tangled and so many more awesome films and is loosely based on the Hans Christian Anderson’s fairy tale The Snow Queen. The film stars the voices of Kristen Bell (Veronica Mars) as lead heroine Anna; Alan Tudyk (Suburgatory and the original British comedy Death at a Funeral) as the Duke of Weselton; Jonathan Groff (Glee) as mountain man Kristoff, Josh Gad (21 and Jobs) as Olaf the snowman and Idina Menzel (Enchanted and Glee) as Elsa, the Snow Queen and Anna’s elder sister.

The synopsis on IMDB reads as follows,

Fearless optimist Anna teams up with Kristoff in an epic journey, encountering Everest-like conditions, and a hilarious snowman named Olaf in a race to find Anna’s sister Elsa, whose icy powers have trapped the kingdom in eternal winter.

Check out these cute moments from the trailer!

Kristoff: “You wanna talk about a problem? I sell ice for a living.”

The Duke: “My lady.” [The boat tips over and the Duke saves her and the two are in an embrace]

Anna: “I like fast!” [puts her feet up and relaxes]

[Kristoff spits to clean the lacquer]

[Anna gets hit by an evil snow man] Anna: “It is not nice to throw snow, people!”

Anna: “I’m calm, I’m calm.” [turns around, and then turns back and throws a snow ball]

Olaf: “Some people are worth melting for.”

[can we get an awwwwwww]

Kristoff: “Those are my legs.”

Frozen is directed by Chris Buck (Tarzan, Surf’s Up) and Jennifer Lee, who wrote the screenplay for Wreck-It-Ralph, and shares writing credits for Frozen with Shane Morris. Frozen is out in theatres on December 6, 2013.

Are you excited for Frozen?

Reblogged this on The Random Ramblings of a Devoted Fangirl and commented:
Frozen trailer!

Ay, do ME a favour and grab MY butt. Oh wait FFFLLLLBBBERRRTTT OK go ahead

[…] did a post when the trailer for the film was released and included our reactions and stills from the film. The […]