Filming on Vampire Academy wraps up!

Yesterday we posted about how most actors had wrapped up filming on Vampire Academy: Blood Sisters this past week and you can read our full post here – https://fangirlingcentral.wordpress.com/2013/07/20/the-end-of-one-journey-is-the-beginning-of-another/

Today we bring you the news that the fat lady has sung … that means Vampire Academy has wrapped up principal photography and is now going into post-production … so don’t be emotional guys and girls, because that means official stills, teasers, trailers, interviews and the MOVIE itself!

…and that's a wrap for @DomSherwood1! #Christian #VampireAcademy

Done! Going to miss everyone! So so sad xx pic.twitter.com/PUpPq4Lhxc

This is a terrible journey home! Im genuinely sad its over! I met the most amazing cast and crew! I cannot thank you enough!! Love you all x

Oh, and thank you for the amazing support from everyone!!! Cant wait for the movie and to get started on the next ones! #pyromaniacs

As the hours went on and the night took over, Sarah Hyland‘s (who plays Natalie Dashkov) boyfriend Matt Prokop took to Twitter to show that he too was waiting for her to finish.

And lo and behold … a couple of hours later, Sarah tweeted that filming was done along with a picture of chairs of Rose, Natalie and Lissa.

Just filmed the very last shot of #VampireAcademy !! That's a picture wrap!! Love this crew and cast SO much! pic.twitter.com/MwlrZJ3fWS

That's a wrap on "Vampire Academy." Tears of joys flooding the set of our St.Vladimirs! #vampireacademy pic.twitter.com/DF7I7Y5oKA

That's a wrap on Vampire Academy! It's been the single coolest experience of my life, & I so hope to be back doing it again.

OVAM even tweeted about heading back to LA … its a hectic life!

Lucy Fry, our Lissa Dragomir, posted a picture on Facebook on July 21, to mark the end of filming.

That's a wrap on vampire academy!!! I feel like I'm waking up from a wild dream- It's been an incredible journey… http://t.co/lnSpbxqyJM 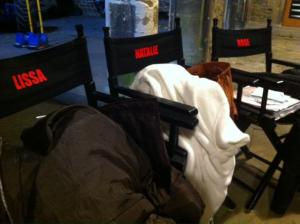 Some extras wrapped up on July 20, too –

And it's a wrap people! Very cool to have my own trailer on set tonight. #dreams #filming http://t.co/fans2jrxax

I love that after giving up my acting dreams I ended up with a last minute role in upcoming #VampireAcademy last night. #blessed

Filming may be over but we have some great things to look forward to! Until then …